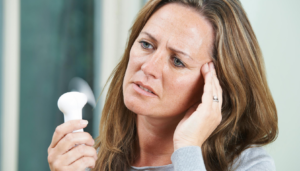 Hot flashes, night sweats, have you had the ‘pleasure’ of experiencing them yet? If not, lucky you!  Eighty-eight per cent of post-menopausal women suffer from hot flashes or night sweats (vasomotor symptoms; VMS).  To make matters worse, they’re often accompanied by sleep disturbance, pain, concentration difficulty, mood disturbance and reduced energy (Reed, Guthrie, Newton et al., 2014). BUT – there’s a way to reduce these symptoms!

While hormone therapy is available, there has been a surge of interest in behavioural therapies such as exercise – which may aid in improving your everyday life for those of you who experience these VMS symptoms. Exercise as a treatment is particularly favourable as it presents less adverse side effects than hormone therapy and increases comfort for those who participate (Reed et al., 2014).

There are several proposed reasons why exercise can help reduce menopausal symptoms. Firstly, there’s a link between increased body fat and severity of menopausal symptoms. We know that exercise helps with maintaining healthier body composition, and so may indirectly affect VMS (Daley et al., 2013). Alternatively, the increased endorphins released during exercise may act in a similar way to hormone therapy. By increasing your exercise, and therefore endorphins, other major hormones in the body that are involved in menopause are reduced which subsequently helps with thermoregulation stabilisation – which means the ability to regulate your body temperature, when the environmental temperature is variable (Daley et al., 2013).

Melbourne Women’s Midlife Health Project found that over eight years, the women who exercised every day were 49% less likely to experience hot flashes (Stojanovska et al, 2014). Another study found that consistent walking over 12 weeks improved menopausal symptoms where six months of aerobic training can have a significant decrease in the number of night-time hot flushes (Manskillamäki et al., 2016).

To reduce menopausal symptoms through exercise, the type of physical activity doesn’t just have to be aerobic. A random trial was conducted over 12 weeks and found the women who participated in weekly 90-minute yoga sessions, as well as practising at home, saw slight but significant improvement in their daily lives and reduce hot flashes and night sweats. Improvements in sleep quality, insomnia and depressive symptoms were also observed (Reed et al., 2014).

Research into menopausal symptoms is ongoing and needs more evidence to conclude the intervention of exercise as clinically effective for the treatment of vasomotor symptoms. However, we do know exercising will not be harmful to women experiencing menopause and there’s no reason why exercise shouldn’t be included in your daily routine.

If you’re experiencing menopausal symptoms and want to learn more about how certain activities may improve your symptoms, please get in touch with us – we are more than happy to help.