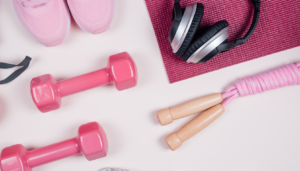 It’s an exciting prospect. Determination to fit into societies view of ‘skinny’ is on its way out and just being healthy is the new fashion! You see it everywhere…. the health aisle of the supermarkets is always expanding, cafes are on board the ‘raw protein ball’ train and active wear is the new must fashion statement… this is known as the #fitspiration movement.

What does it mean you ask? Advertisements, photos and videos on social media and in the media that is intended to inspire people to get physically fit through rigorous exercise and diet, usually with the goal of attainting an ideal and attractive body.

At a superficial level we could say society has taken a step in the right direction. However, I’m reluctant to confirm I’m completely on board with the #fitspiration movement in its current presentation. Let me explain…

The purpose of the #fitspiration movement is to motivate behavioural change in followers, directing to a healthy lifestyle change (Boepple et al., 2016). Our social media should be flooded with scientific based evidence with recommendations of more balanced diets, women demonstrating the recommended cardio to resistance training ratio and increased body satisfaction acceptance among followers.

However, our experts in the field are warning that this new trend may be as detrimental to follower’s self-esteem as the ‘skinny’ idealisation – the concept of the ideally slim female body, which is slender with a feminine physique, a small waist and little body fat (Robinson et al., 2017; Homan et al., 2011).

The problem is that majority of fitness influencers focus on appearance as an incentive for engaging in exercise and encourage restrictive eating (Boepple et al., 2016). The body commonly portrayed in media may very well be strong, fit and healthy – however the women who are often the front and centre of the fitness industry are very low in body fat, creating a very unrealistic standard for females (Homan et al., 2011). With being fit and healthy becoming the new standard, women still have body dissatisfaction due to the slender physique constantly portrayed on social media, generating constant comparison (Robinson et al., 2017; Fardoly & Vartanian, 2014).

A content analysis of fitspiration websites by Boepple et al (2016) found support for the internalisation of athletic ideals in comparison to thin ideals still had negative repercussions.

Feelings of guilt were reported by those who internalised athletic ideals when they missed an exercise session. In addition, other studies found that appearance motivated exercise correlated with higher measures of eating disorders, depression and exercise addiction (Boepple et al., 2016; Robinson et al., 2017; Fardoly & Vartanian, 2014).

It’s important to address whether the purpose of the fitspiration movement is being fulfilled. As previously mentioned, the intended goal of the new movement is to encourage a behavioural change among the population towards a healthier lifestyle change.

An experimental study by Robinson et al (2017) looked to see if fitspiration posts actually induced behavioural change and motivation. Their findings suggest that fitness idealised images did not motivate participants in exercise engagement or behavioural change. Interestingly, thin and athletic images saw an increase in body dissatisfaction, exposure to muscular woman did not. This leads us to question – what sort of fitness messages and pages should we be following?

It’s important to note that the line between ‘fit’ and ‘thin’ has not been well defined (Homan et al., 2011). This evokes a question, why was it that in the study by Robinson et al (2017) found that the viewing of muscular images did not lead to increased body dissatisfaction? Muscular toned presentation is not the cause of body dissatisfaction in viewers, but instead is the low body fat in these models.

‘Expand your Horizon’ was a programme created for an experimental study looking at transferring the focus of exercise to centre around functionality (Alleva et al., 2015).  Body functionality refers to the physical capacity of the body. In a nutshell, ‘what can my body do?’, both physically and mentally.

Results of the study indicate that there was a direct relationship between focusing on body functionality, increased body satisfaction and body appreciation (Alleva et al., 2015). Encouraging these findings on our social media platforms would empathise the focus on body functionality rather than appearance.

In my opinion, the #fitspiration movement is a huge step forward in driving our behaviour and values. However, we need to recognise that there is not yet a clear separation between ‘fit’ and ‘thin’.  I believe the emphasis of how fitness improves functionality is likely to improve body image satisfaction and appreciation, which is the original intention of the movement.

To help improve your body satisfaction I would recommend you control what you see on your social media platforms. Consider messages of certain posts and ask yourself whether they focus on functionality or if they are depicting fit and thin as the same thing. If certain posts encourage you to feel negative about your self-image, unfollow them. Start following health experts who focus on health from a functional point of view. These experts include exercise physiologists, physiotherapists, sport specific strength and conditioning coaches and accredited dieticians.

Our promise to you at O2 Active is that we will use our social media to promote our company values. Our content will feature evidence-informed practice. The people you see on our social media will be celebrating their body’s capabilities or working on increasing their natural ability. We will provide real support so that we can encourage real and healthy change… because that’s what the #fitspiration movement is all about.